Reunion Tower has been an icon of the Dallas skyline since the seventies. In need of a refresh, the world renowned architectural firm, Gensler was brought on board as the interior designer. Stimulant was brought on board to help realize their vision for digitally enhanced interactive environments in the lobby, GeO-Deck, and Cloud9, the 5-star restaurant at the top.

Responsibilities — As art director and the only visual designer for this project, I played many roles. Mainly, I was ultimately responsible for all of the look and feel and animation. I also worked closely with our UX designer, our internal stakeholders, and the client to develop the concept and to insure our work integrated with the interior design that was being design simultaneously. I also directed the developers during the build phase and collaborated with photographers and video teams.

There are two Halos on the GeO-Deck, allowing for up to 30 concurrent users. The Halos feature 3D generative backgrounds that respond to both touch and movement throughout the space. The Halos support a variety of content including interactive 3D models and photos of Dallas landmarks, zoomable interactive gigapixel panoramas of the view out any window, control of HD cameras mounted outside the tower for exploring the city in detail, custom-curated maps, a unique video about the JFK assassination (which occurred hundreds of yards from the tower), and an interactive simulation of the tower’s famous light shows. Each display is calibrated for its unique position around the circumference of the floor and provides an experience tailored to its particular orientation, though all content is available from any station. The GeO-Deck is an observation level, 470 feet up, where visitors can get their first taste of the wide expanse of the Texas landscape.

Responsibilities — I designed the overall look and feel for the attract state and all 5 sections of the Halo. I worked closely with the Gensler design team to incorporate the look of the physical space into the digital experience so the overall guest experience would feel seamless and completely integrated.

The Halo is an arc of 15 seamlessly-integrated displays linked together to create a massive 60-foot-wide reactive and interactive surface. 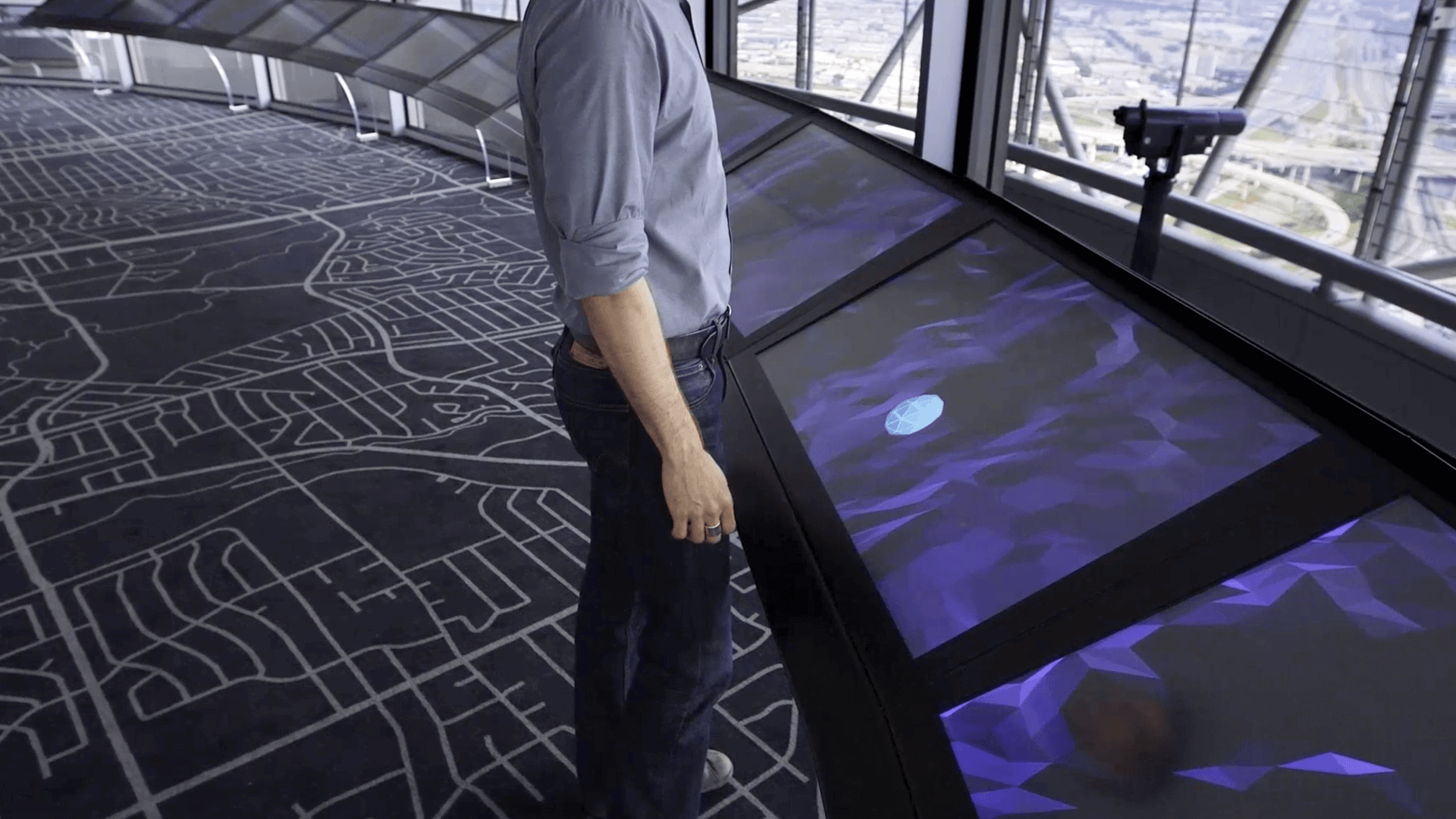 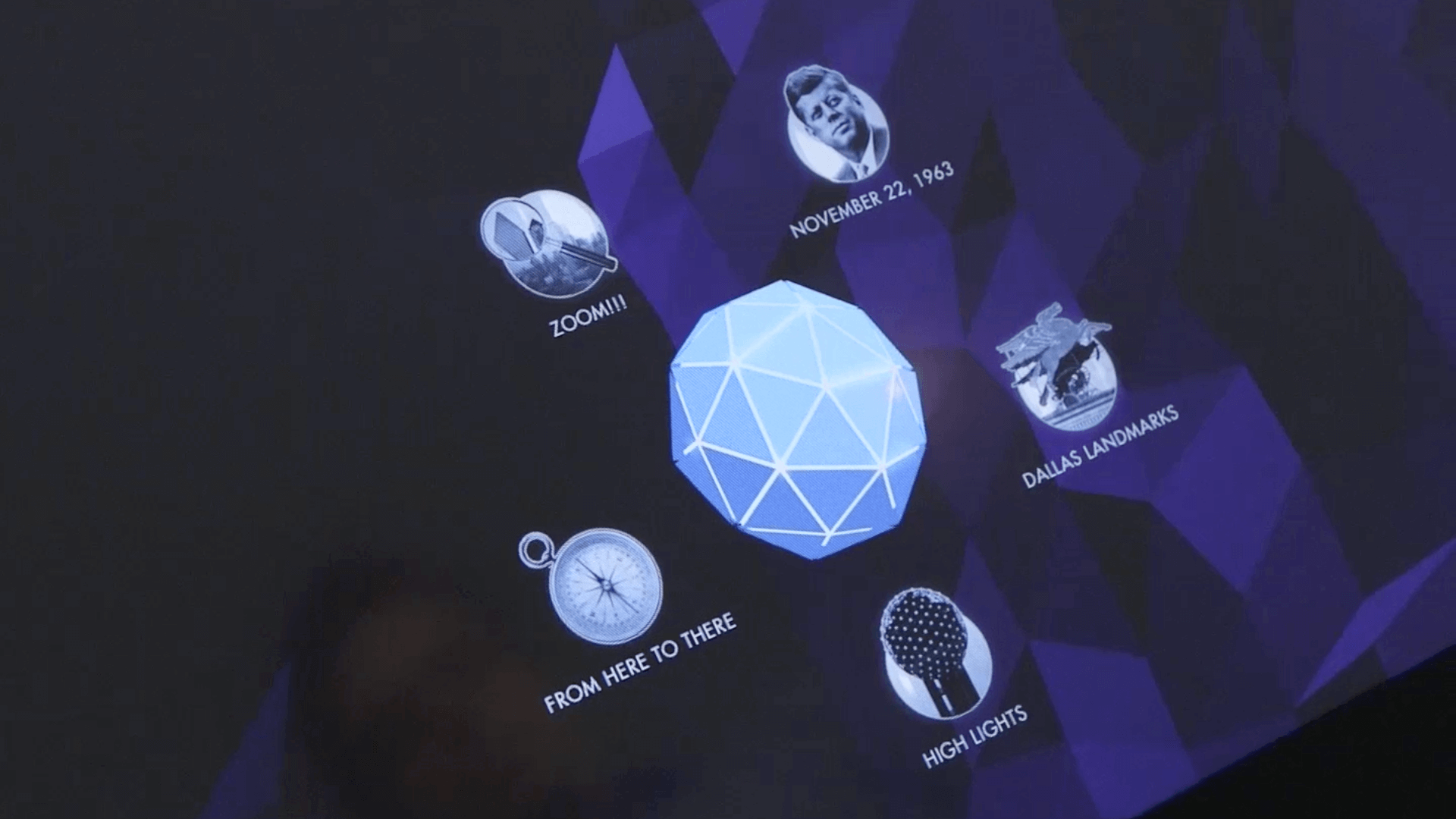 This mood board was inspired by both the interior design of the space and the exterior of the tower. Gensler's interior design used geometric shapes and tessellated triangles throughout. The images in the mood board were chosen to serve as inspiration for the UI and background landscape of the interface. 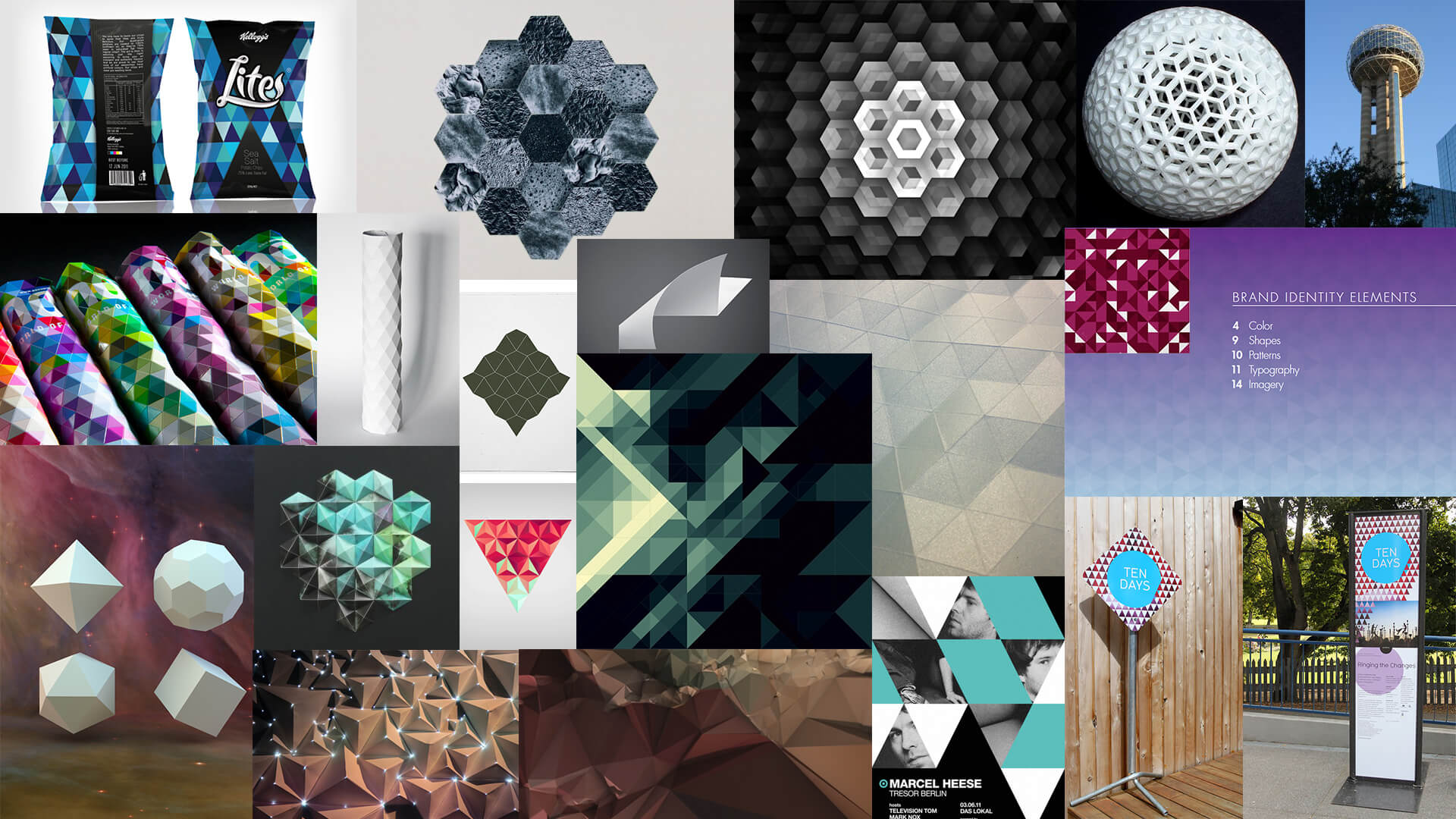 Before directing the developer, I conducted a ton of testing for background and the spherical menu using a combination Cinema 4D and After Effects. The menu's form was inspired by the iconic Reunion Tower sphere and would open and close on touch. When opened, a set of 5 icons would appear. Each icon represents a unique experience that can be explored by visitors to learn more about Dallas and the surrounding area. Below are some tests that helped guide the development. In the final build, the sea of spheres was generated dynamically and would ripple when touched.

The section on the Halo called "Zoom" allowed visitors to pan and zoom a 360° giga-pixel image of Dallas taken from the top of the tower, they could also take control of 1 of 5 high-definition live cameras mounted on the exterior of the tower to look around the city in real time. I created a quick and dirty story board to share what I was thinking for the animations. This is just one of many examples I created for our developers. 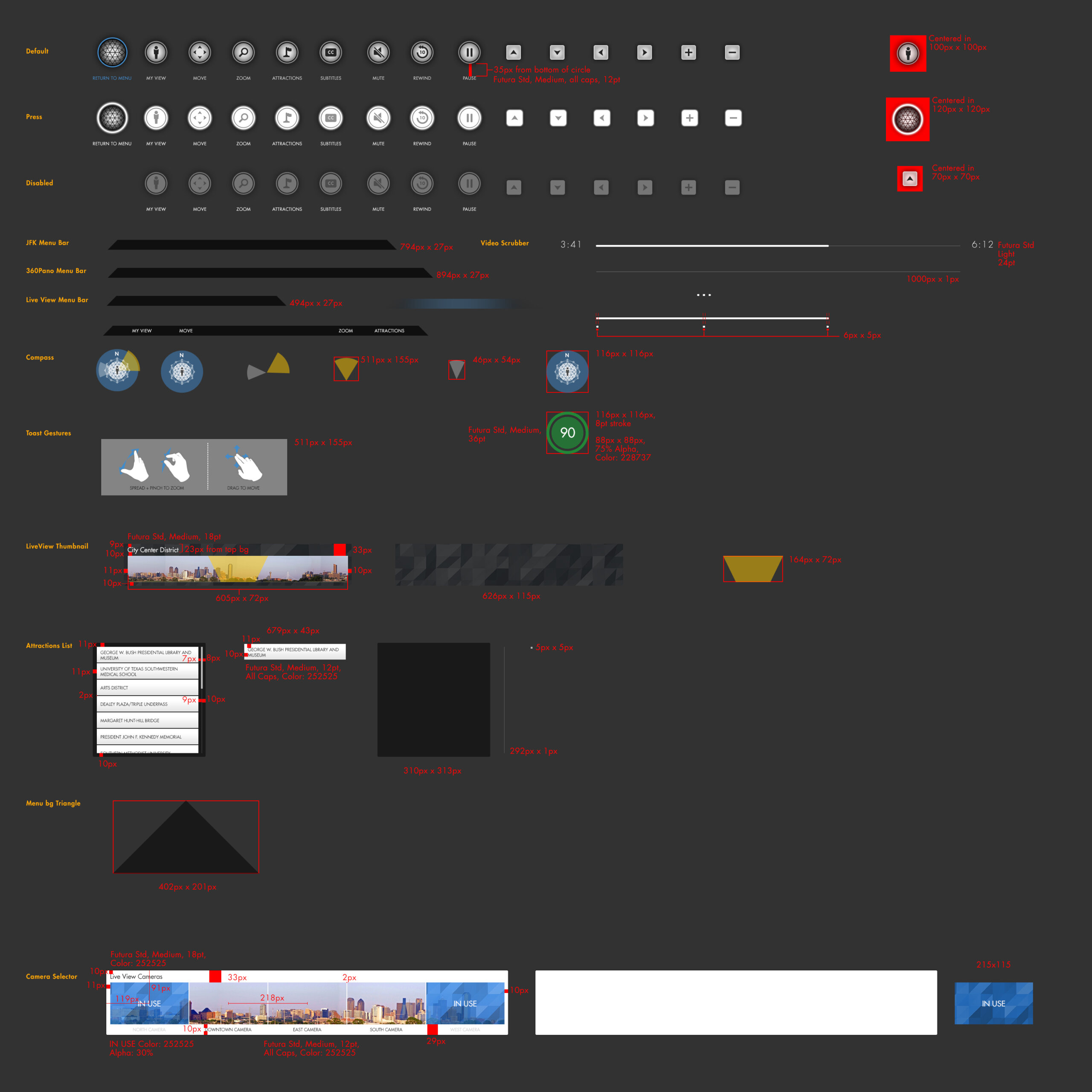 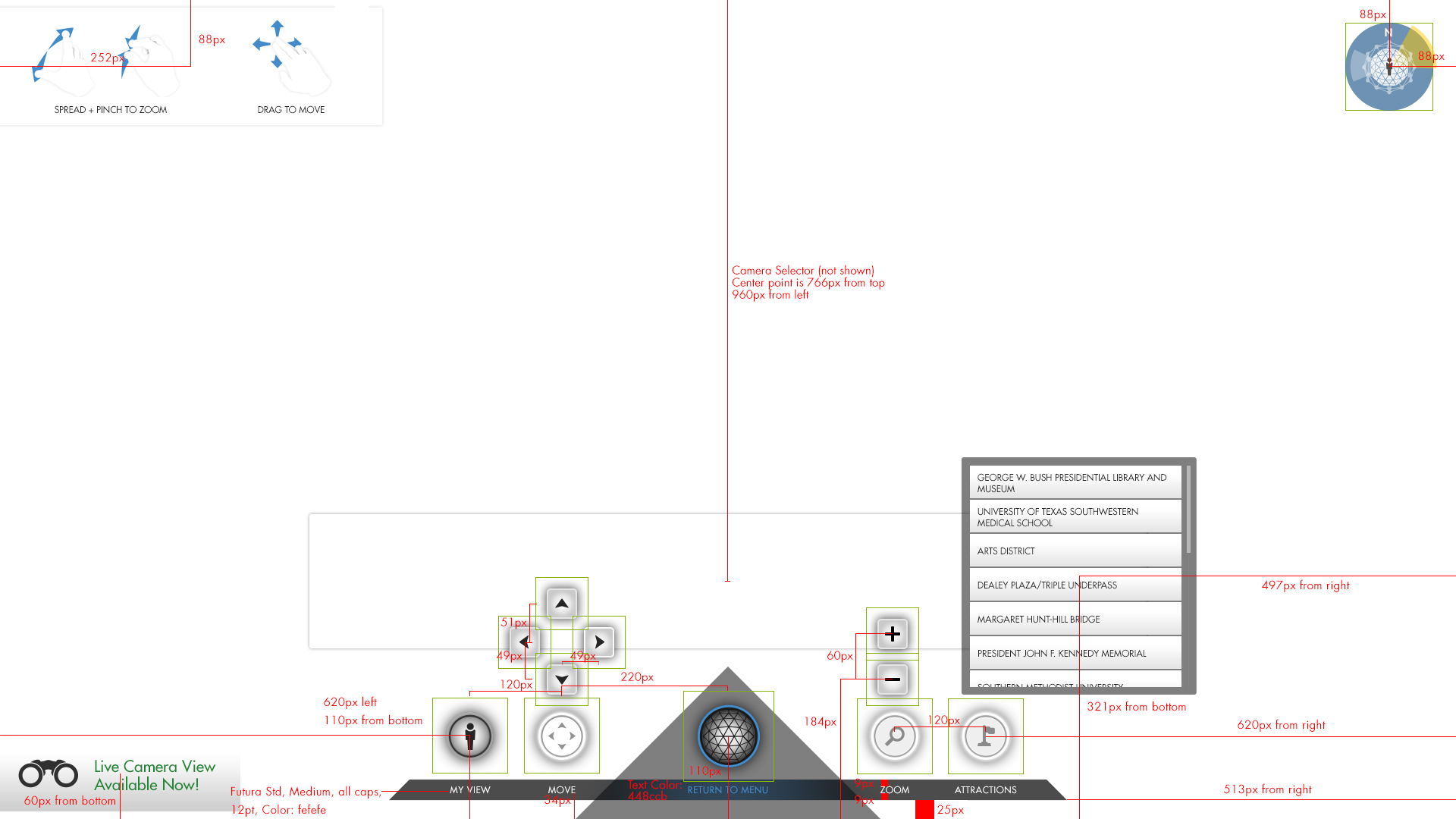 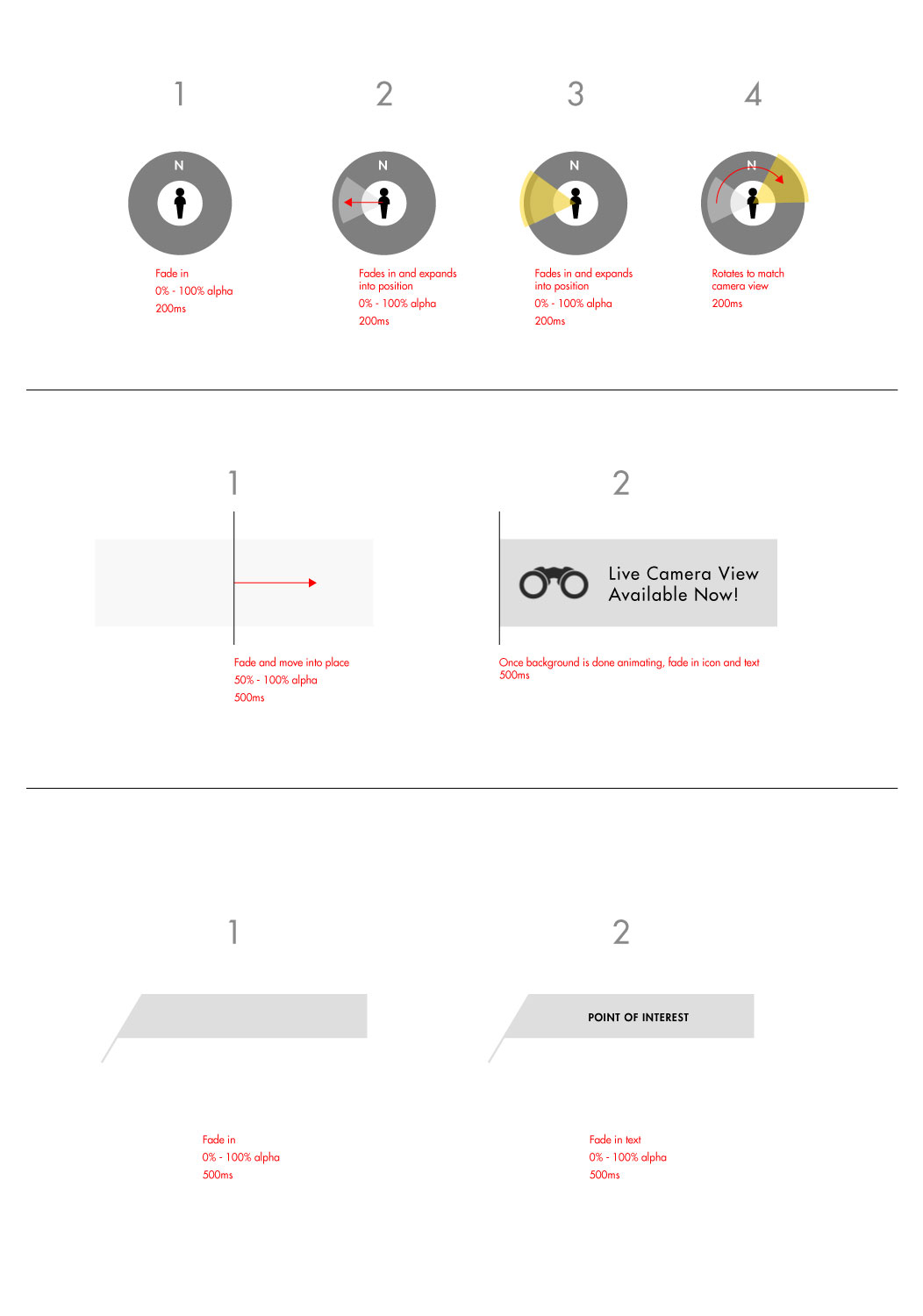 The Dallas Landmarks experience allows visitors to visit area landmarks virtually. With a tap of the finger, you are flown from the tower, to the landmark of your choice and are shown where it's located in relation to the Reunion Tower. November 22, 1963 was the day JFK was assassinated. The horrific event occurred about 50 yards from the base of the tower. The video features never released footage and interviews with one of the last living secret service agents that rode with the president that day. I both created the UI for the video and art directed l.Inc Design, the studio that produced the video. 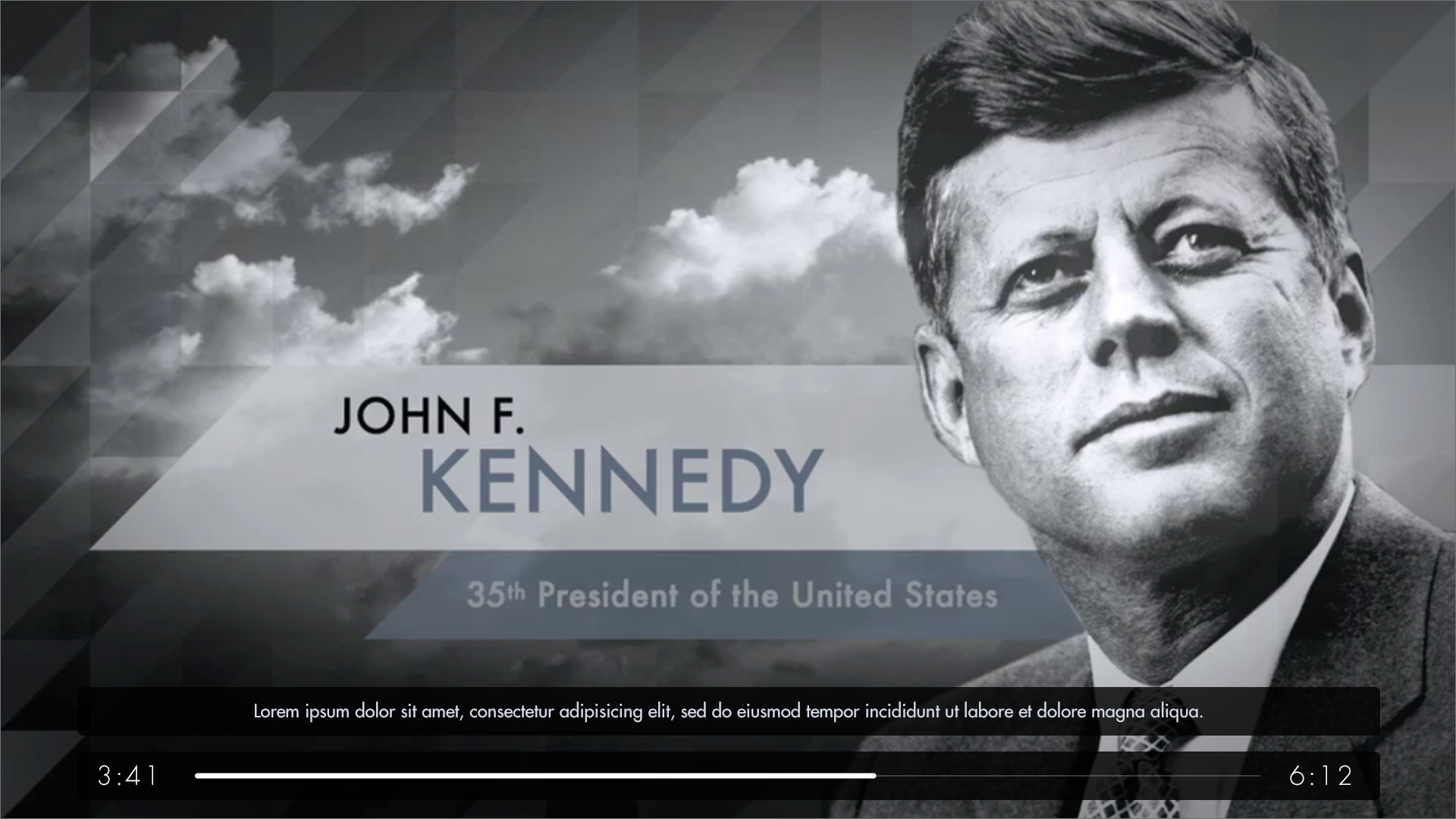 The Reunion Tower was know for having a variety of light shows to compliment events that occur, such as Valentine' Day, Christmas, and sporting events. We wanted to bring some of that into our app. High Lights is a fun experience that allows visitors to create their own light shows by simply touching the screen. Using 1- 10 fingers creates different lighting affects on a 3D model of the tower. If you add another person, you'll get even more light shows and we even added an easter egg for when a total of 20 fingers were detected. 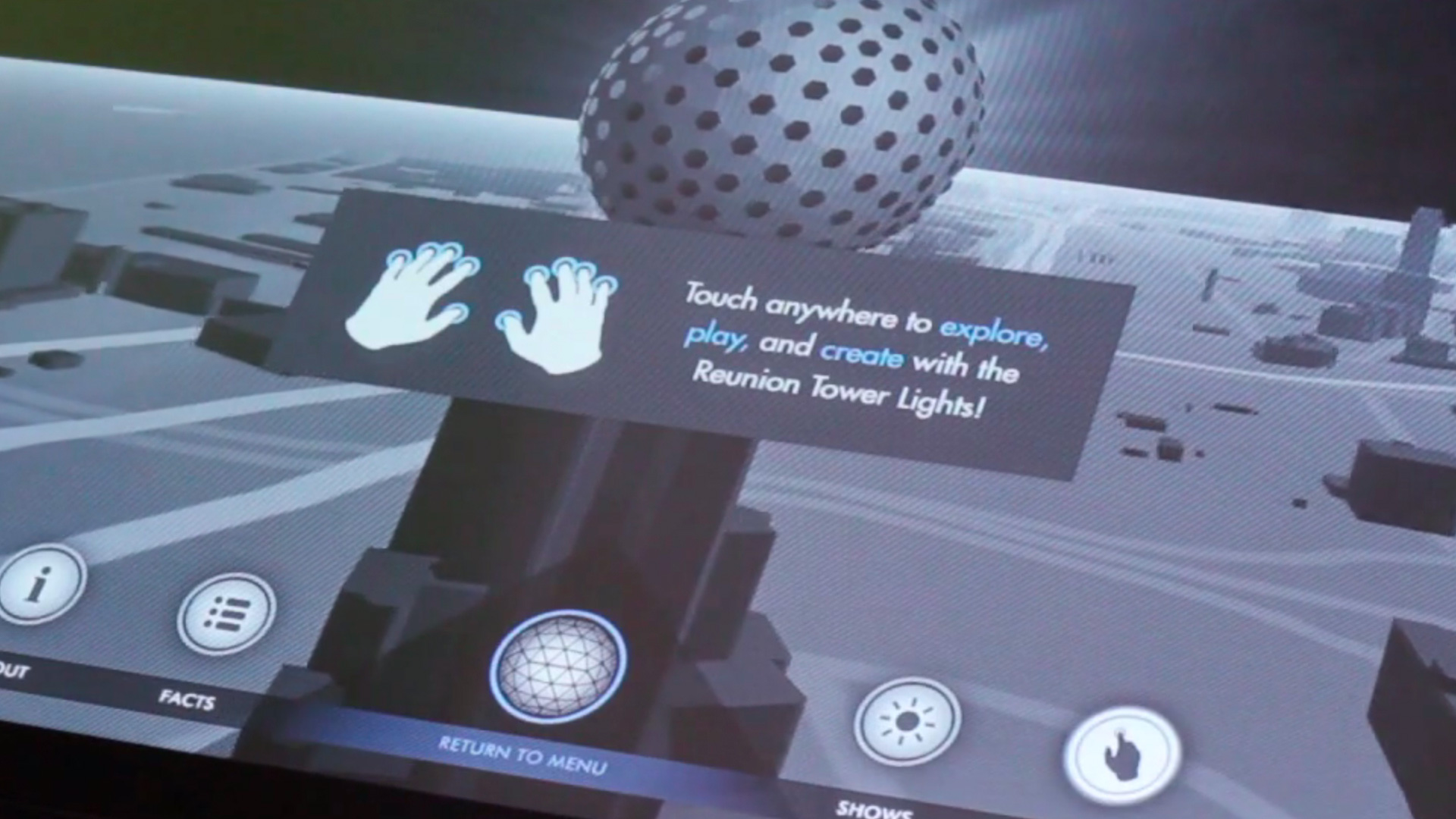 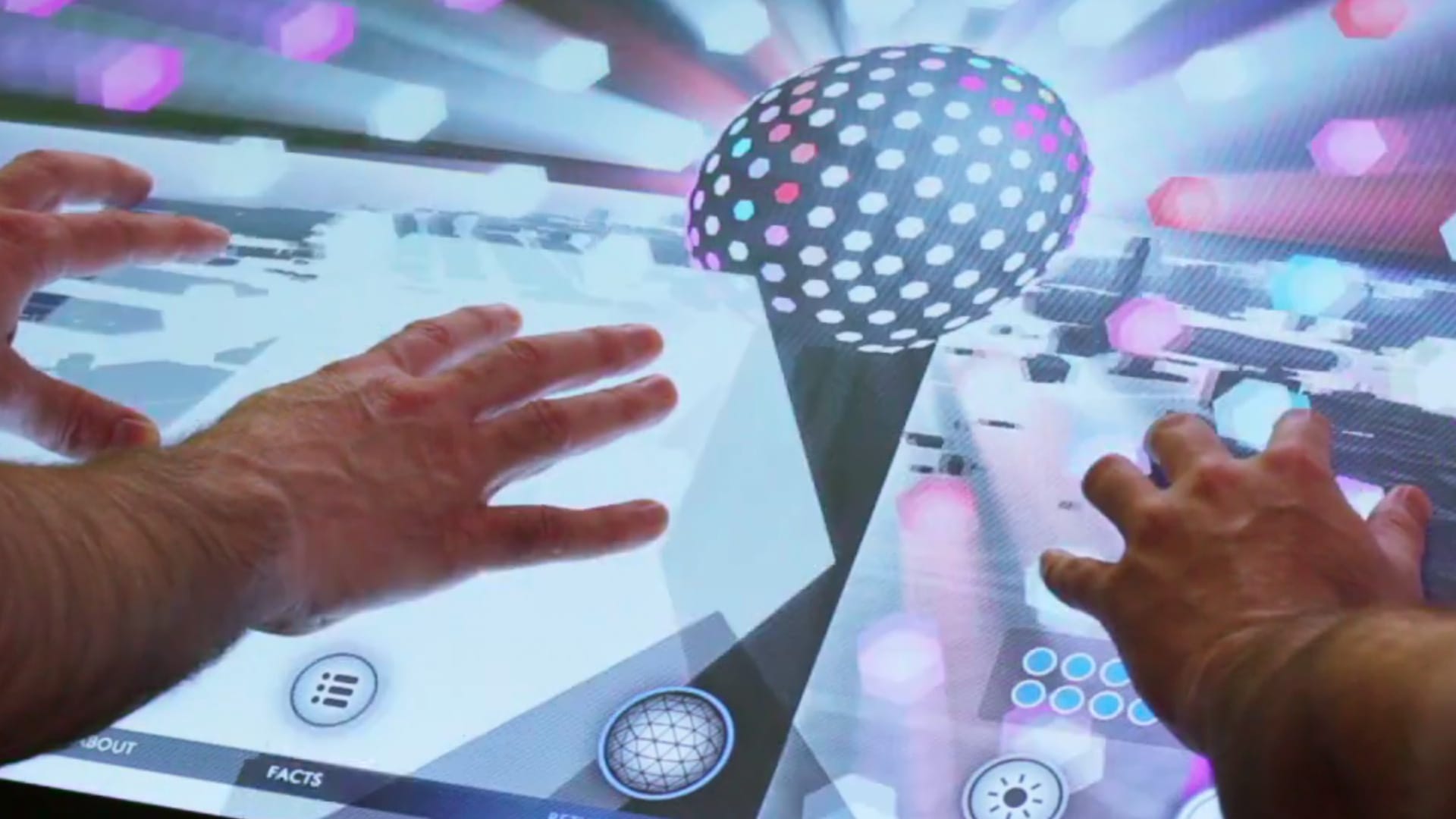 The lighting engineer for the tower provided us with a schematic (shown below) to show how their lights were wired. We used this data to create our lighting sequences. 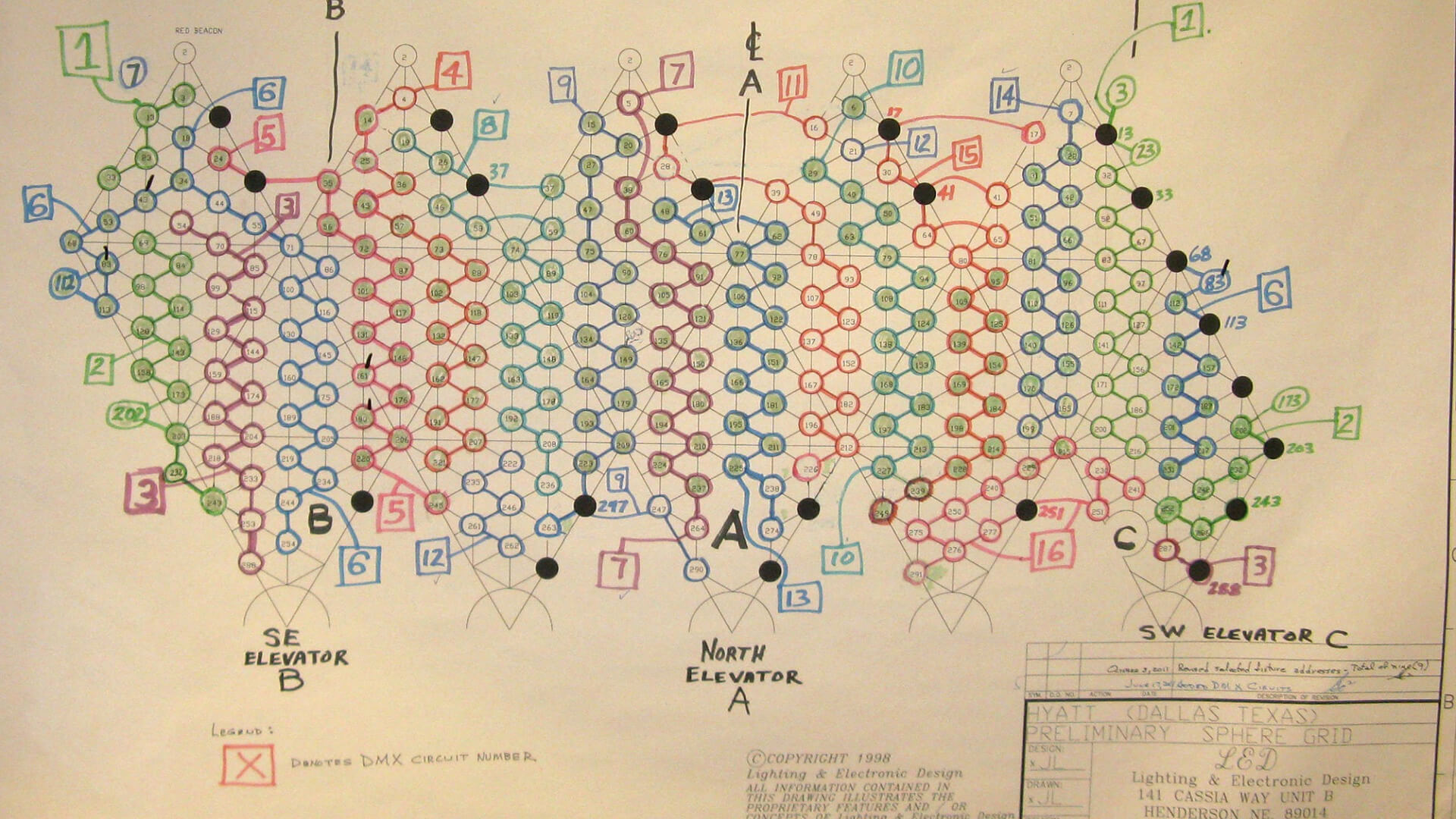 Cloud 9, is a futuristic bar and lounge serving Texas-themed food and cocktails from Wolfgang Puck. The “Big Sky” is a digital installation on the ceiling, combining abstract steel clouds, dynamic LED lighting, and 17 HD screens that comprise a massive-scale abstract weather simulation. The experience treats guests to a continuously-changing surrealistic view of Dallas weather, rendered in real time. As the simulation cycles through different times of day and various weather patterns, color changes are triggered throughout the entire ceiling. Each moment is unique and married seamlessly to the architecture and design of the space.

Responsibilities — I produced 3D renderings and concept art to establish the direction for the Big Sky piece. I also helped fine tune the final look and feel on site in real time. 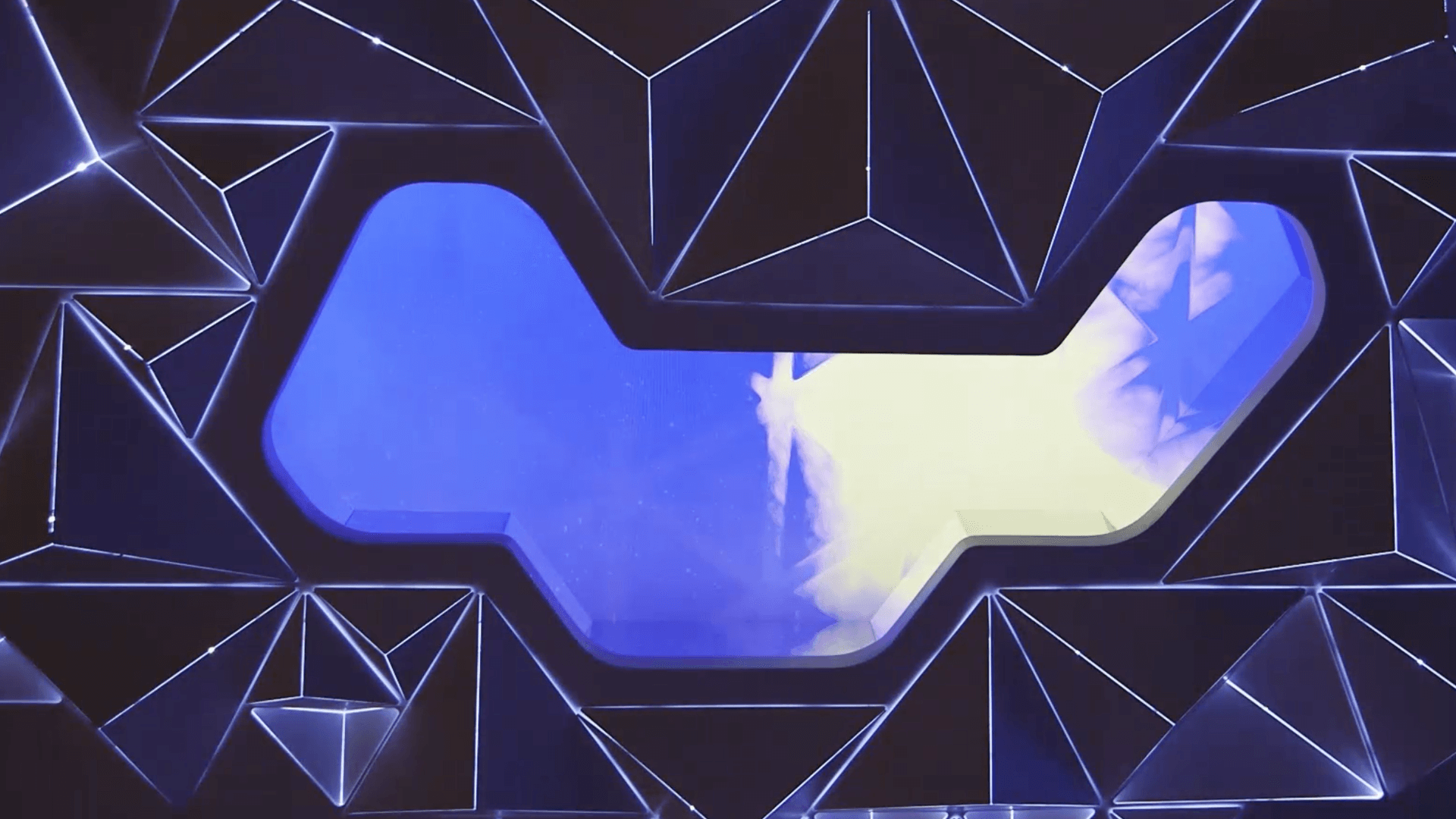 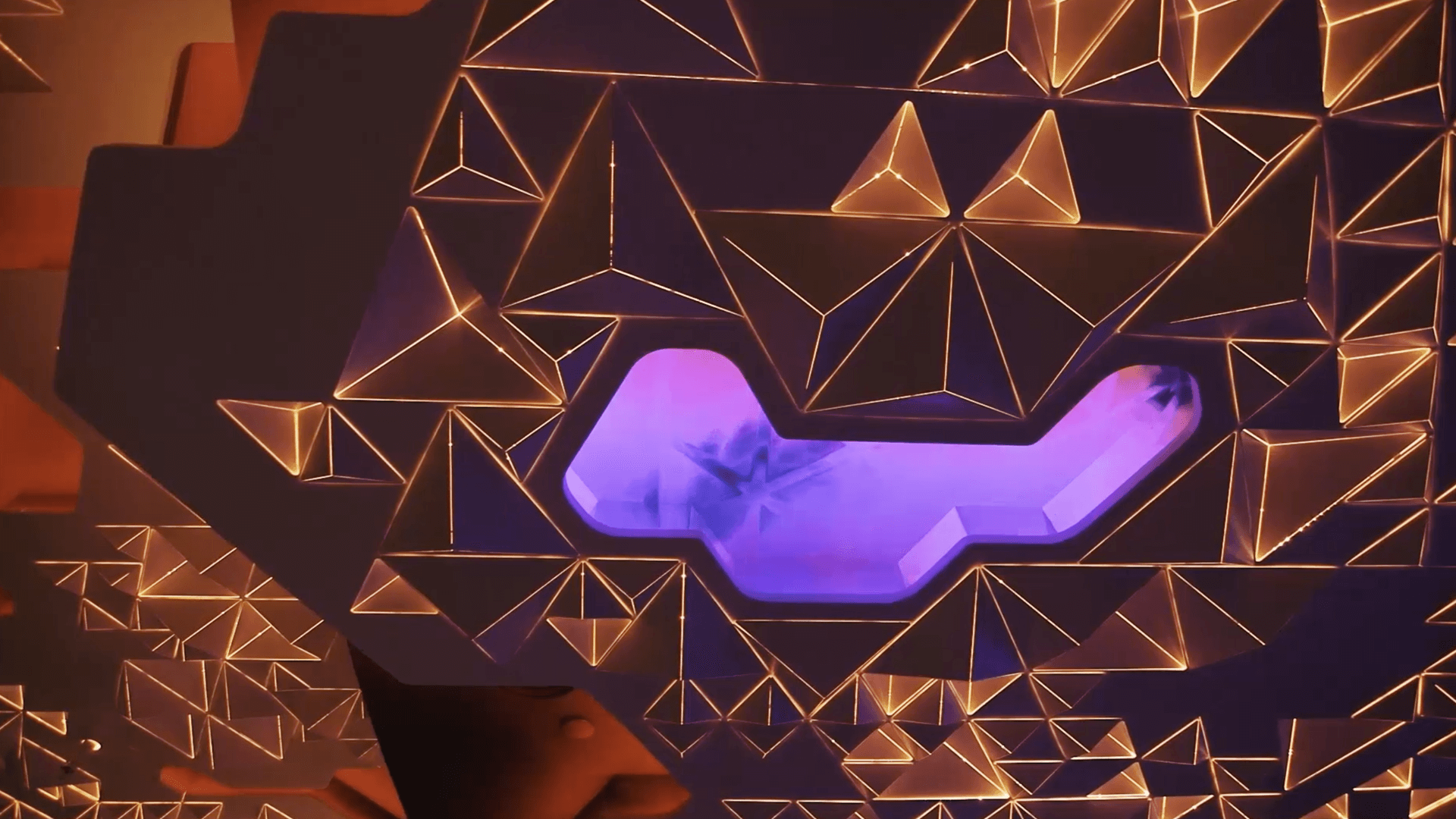 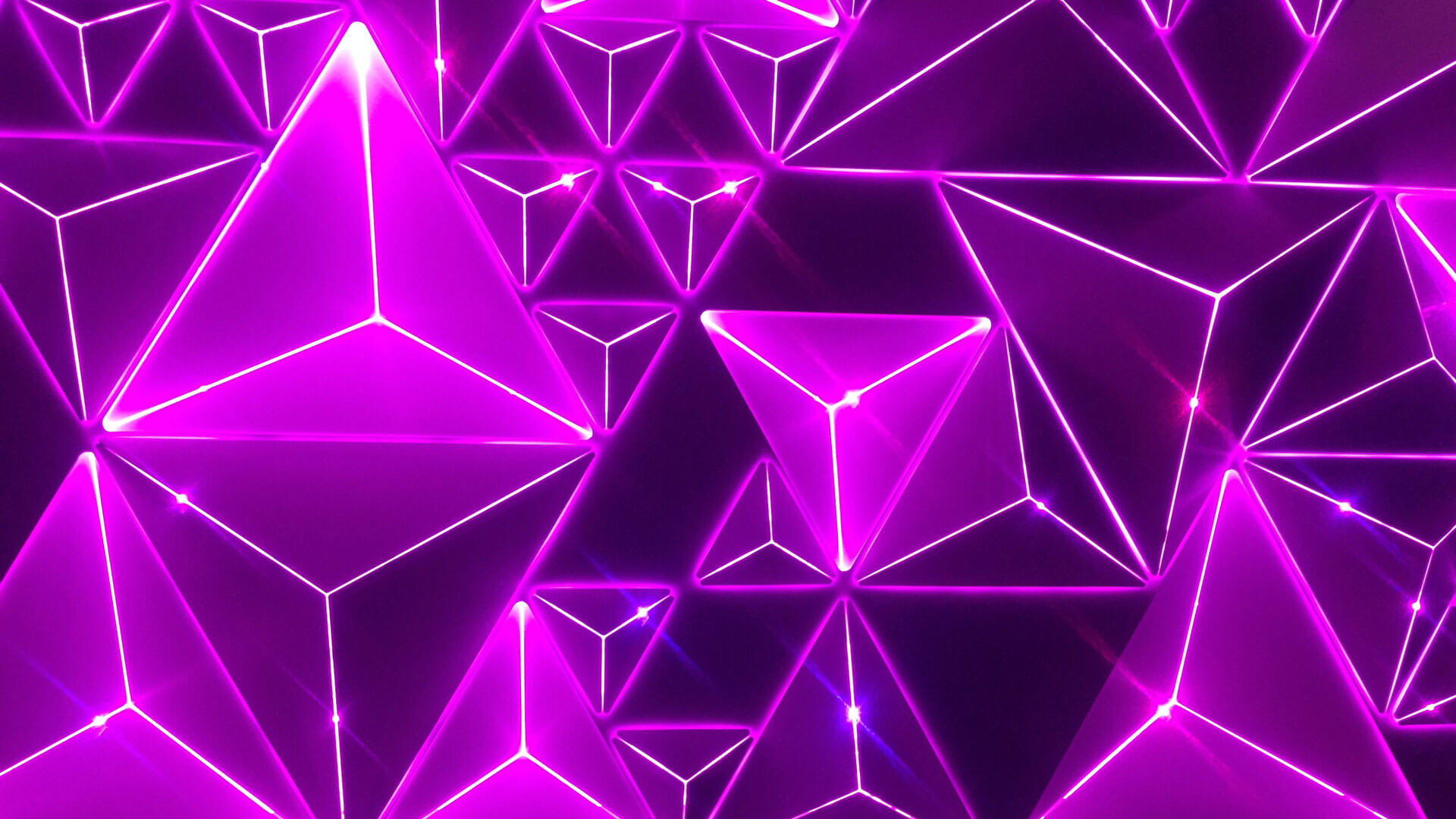 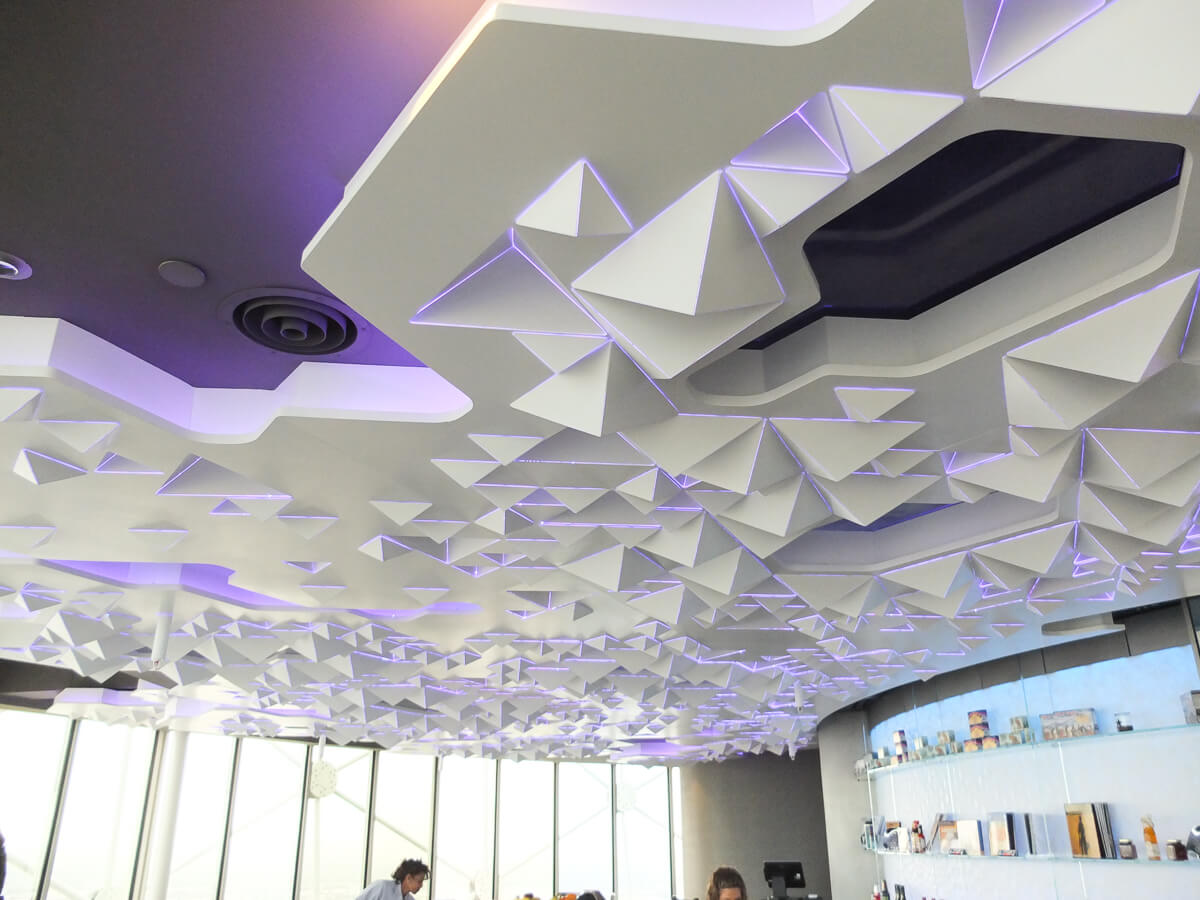 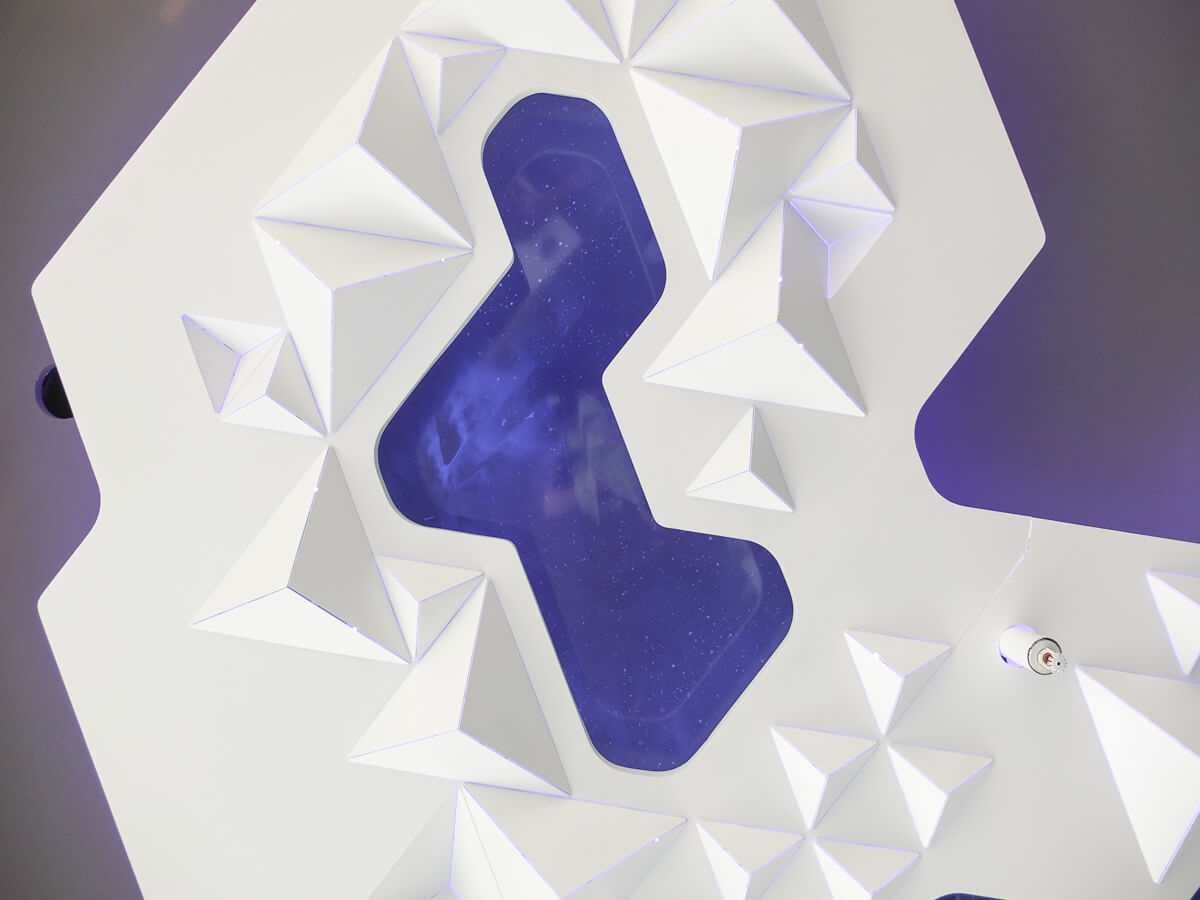 The concept was that while sitting at your table, you can look up through a faceted glass ceiling. Originally we were going to use realtime weather data to determine what you see above, but the weather in Dallas doesn't change often enough, so we opted to use a timer for a more dramatic affect. Below are a couple of the 3D and motion tests that I made to explore what Big Sky could look like.